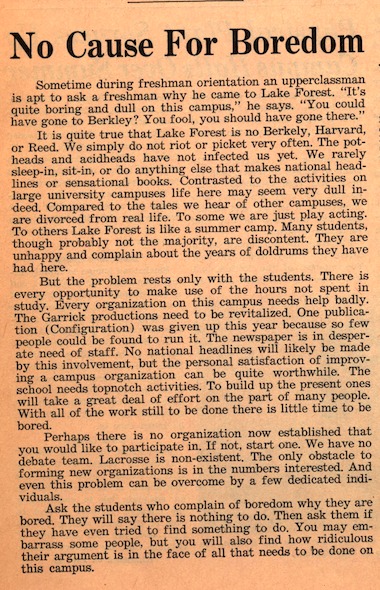 Lake Forest College has often been characterized as a small and sleepy school, largely disconnected from the larger political context of the world around it. Complaints about the apathy of the students and their disinterest in activism have resounded around campus since the early 1960s. Despite this perception, Lake Forest College has a rich legacy of protests, community action, and struggles for student rights. The second half of the 1960s and the 1970s saw an explosion of student action and involvement. Groups like Black Students for Black Action (BSBA) did crucial work fighting for the equality of all students at the college, and ensuring equitable opportunities for future students. There was a sustained effort to hire black staff and faculty, as well as expanding the curriculum to include courses that foregrounded women, people of color, and the environment. There were protests, sit-ins, teach-ins, love-ins, community debates, public forums, walk-outs, and many other kinds of non-violent action. Lake Forest College students went to marches in Washington D.C. or New York City, started inner-city tutoring projects, and volunteered in black voter registration drives in the South. These years were highly transformative for the college, and laid the foundation for many of the active student groups and outreach projects still in place today. 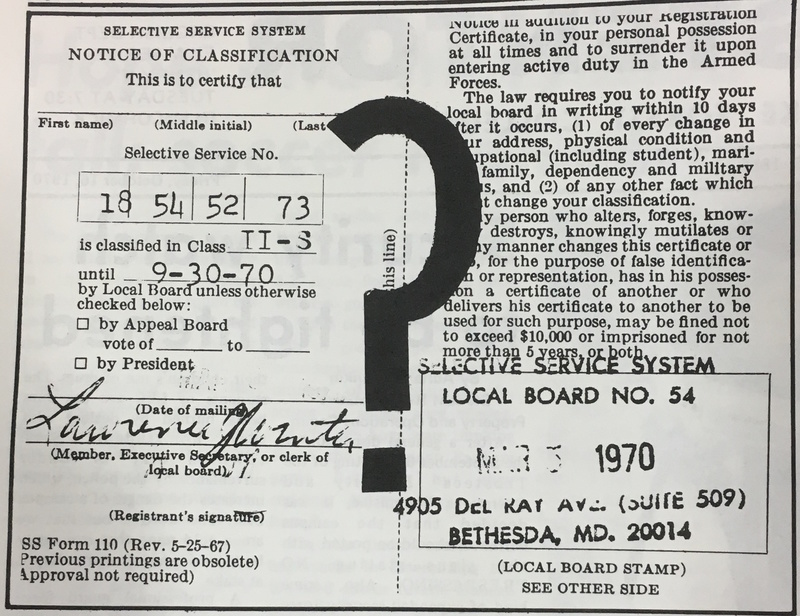 At the beginning of the 1960s, Lake Forest College was a very different school than it would soon become. Student organizations such as fraternties were allowed to reject new members on the basis of race or religion. There was a strict dress code for every meal eaten at the cafeteria, and women were not allowed to leave their building at night without written permission from their parents. Although discrimination was banned in 1962 at the college, it was practiced until the end of the 1960s. Black students found it impossible to join a fraternity, often being turned down because of "personal differences". Almost all material in the curriculum was authored by white men, and every professor was white. In 1962, barbershops in the town of Lake Forest refused to serve black customers from the College and many other local business followed suit. The Lake Forest College of the early 1960s was hostile to differences, unconcerned with the voices of the students that attended the school, and skeptical of any changes to tradition. The next decade would transform almost every aspect of the school, a movement lead by the actions of passionate students.

Although the Vietnam War began in 1955, it wasn't until President Kennedy's dramatic escalation starting in 1961 that it was really felt widely at home. This was true for Lake Forest College, where students didn't take much notice of the War until the number of people being drafted started to rise drastically in 1965. Suddenly, the Vietnam War was the topic on everyone's mind. And as the student power and civil rights movements found their way to campus, so did an increasing opposition to the war.