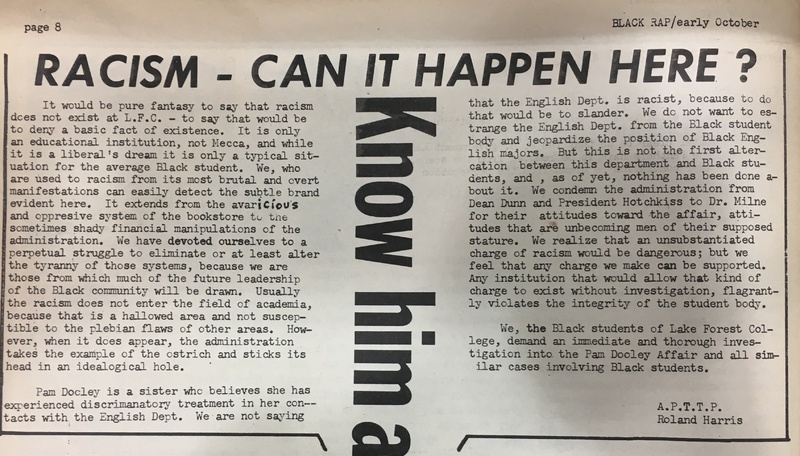 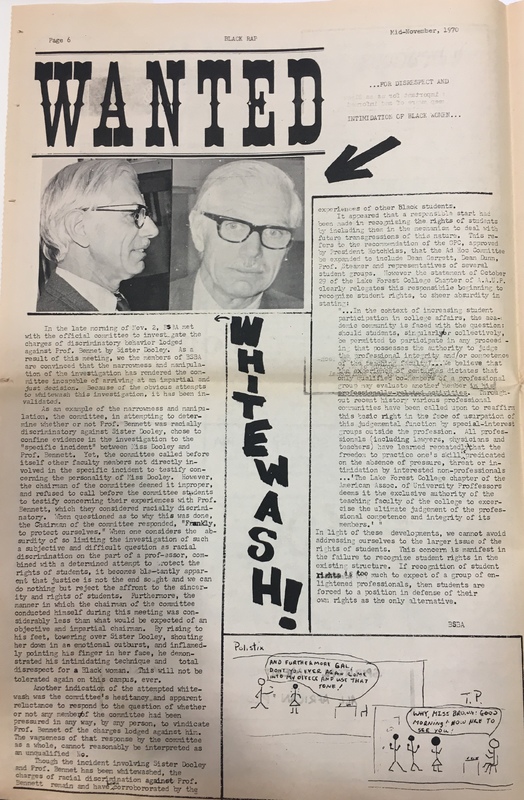 In the spring of 1970, Pam Dooley, a black student at Lake Forest College was told she was failing her English class. She believed that she had been doing very passable work and that she was being failed on the basis of her race. After reporting this incident to the head of the English Department, the professor (Bennett) backtracked on his statement, saying Miss Dooley was not failing the class after all. She reported the incident again, believing that Bennett dropped the issue for fear of getting in trouble. The administration did nothing about these charges until the Black Rap published a statement accusing Bennett of racism, and of the administration for allowing it to continue with their inaction on the subject. After a contentious investigation, Dooley's charges were found unproven. There was widespread outcry with many insisting that the investigation was conducted improperly, as well as Bennett and others insisting that Dooley should be punished for accusing him. President Hotchkiss agreed to establish an unbiased committee for investigating any future similar cases, although this didn't appease either party.

Black students at Lake Forest College felt that a predominantly white administration and disciplinary system were not sensitive to the myriad of ways that racism manifested itself at the college. It was felt that white administrators only understood blatant and violent racism, instead of the subtle ways that it could be employed in the academic world to hold black students back. 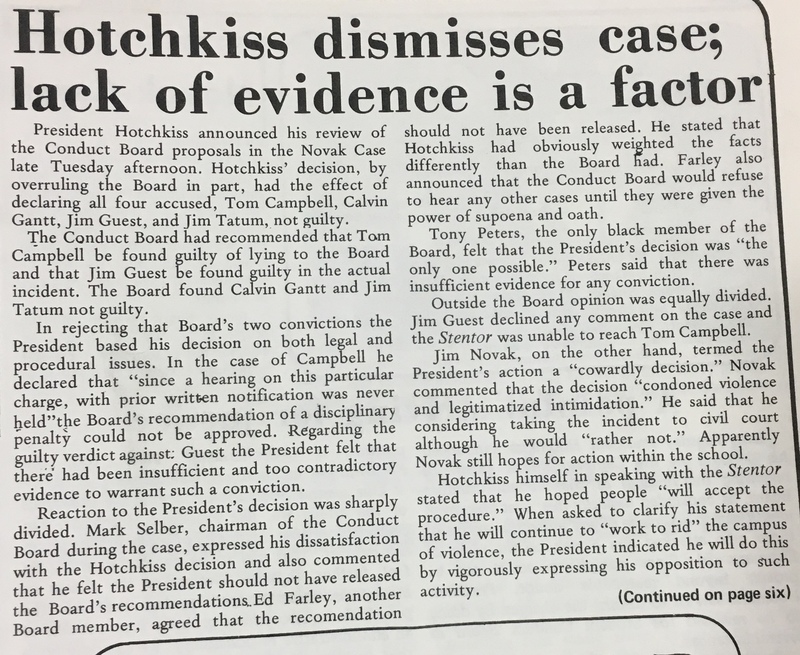 On February 24th, 1971, a series of violent altercations between white and black students on campus exacerbated pre-exsisting racial tensions, and embroiled the school in a long and tense investigation. Jim Novak, a white student, and Tom Campbell, a black student, got into two fights on the basketball court, the exact circumstances and events of which were unknown. After these fights, both men went to the hospital, but when Jim Novak came back to the Lake Forest College Campus, he was beaten badly by an unknown group. He insisted that it was a group of black students trying to get revenge for Tom Campbell. Tom Campbell said that this was untrue, and most of the men who Novak had named as his attackers were proven not to have been on campus at all at the time of the incident. Furthermore, it was a contested point that the two earlier fights between the two men were caused by racial slurs.

After a long deliberation by the Conduct Board, they convicted Tom Campbell of lying to the Board, and Jim Guest (a black student) of attacking Jim Novak. They recommended disciplinary action to President Hotchkiss. However, in a shocking and controversial move, Hotchkiss reversed the decision and dismissed the entire case on the grounds of lack of evidence. Both parties were deeply unhappy, and Jim Novak attempted to seek legal justice outside of the college. BSBA insisted on the need for separate disciplinary mechanisms for black students, untouched by the racism inherent in existing administrative structures. Many believed that Hotchkiss made his decision in an attempt to deescalate the anger and racial tension building on campus. Some even alleged that he was afraid of a violent riot after the convictions.

Although this incident was clearly formative to the racial consciousness of Lake Forest College, and relations between students and the administration, it is a case where the written record of events is quite opaque. In contemporaneous issues of the Stentor, as well as correspondence about the investigation it is obvious that key pieces of information are missing.

Insofar as how these incidents stacked up against daily lives and small tensions that exsisted in Lake Forest College students' lives, it's hard to know. The Stentor's artcles about the daily lives and happenings of students on campus was mostly by and about white students. The Black Rap was often focused on national and international news, and neglected to talk about the minutiae of black student's lived experience at Lake Forest College. As a result, there is not a rich body of information about the college's students of color, or any other minority groups.